The eighth wonder of the world

Natural Colour
Charles Urban's place in cinema history is largely assured by Kinemacolor. Although modern film stocks and television broadcasts have accustomed us to a seemingly perfectly natural colour, viewing one of the few Kinemacolor films that survive today can still communicate the sense of wonder felt by those who first saw the world on the cinema screen in something approaching the natural colours of life in 1908, when Kinemacolor was first unveiled before the world. Then it could be seriously acclaimed as "the eighth wonder of the world", which was as much a tribute to Urban's brilliant marketing of the system as it was a tribute to the colour films themselves. Urban himself came to believe that he had found motion picture perfection. Disillusionment would follow only a few years later. 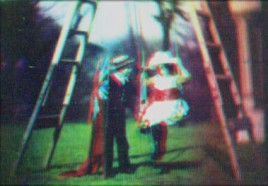 Lee and Turner three-colour system
Kinemacolor had its basis in the experiments of inventor Edward Turner and financier F. Marshall Lee, who in March 1899 patented a three-colour motion picture system. This was based on the discovery in the mid-19th century by James Clerk Maxwell that virtually all colours could be produced by a combination of the three primary colours red, green and blue. Turner's patent aimed by a complex mechanism to translate Maxwell's principles to motion pictures. This additive principle (bringing together the separate colour parts to create a composite full colour result) would be the inspiration for Kinemacolor.

Lee started losing interest in the slow progress that was being made, and Turner went to Charles Urban to request assistance in developing the patent, in return for exploitation rights. Urban was instantly enthusiastic, and got his engineer Alfred Darling to design a camera and projector. A few individual frames and one short strip of film show that the camera could take pictures, but in projection (which had to be at a quite impractical 48 frames per second to avoid distressing flicker) the images were impossibly juddery. Then, early in 1903, Turner died of a heart attack. Undaunted, Urban bought up the patent rights and set his associate G.A. Smith to work on the project.

'We've Got It - We've Got It'
It took Smith three years to come up with a solution. After experimenting variously with three colours without success, he made the happy discovery that an adequate colour record could be achieved with just two colours, red and green. Urban's own account some years later is romanticised but memorable: 'It took about thirty seconds to make the exposure on a specially prepared negative film after which we went into Smith's small darkroom to develop the results in absolute darkness. Within two hours we had dried the negative, made a positive print of the 50 feet length, developed and dried it - and then for the grand test. Even today - after seventeen years, I can still feel the thrill of that moment, when I saw the result of the two-colour process - I yelled like a drunken cowboy - "We've got it - We've got it"'.

Kinemacolor
Smith applied for a patent (B.P. 26671 of 1906) in November 1906. There then followed two years of experimentation, before Kinemacolor was given its first press showing on 1 May 1908 at Urban's new Wardour Street premises, 'Urbanora House'. Kinemacolor worked like this. The camera was fitted with a rotating wheel with red and green filters, so that alternate frames were exposed through either the red or the green, but resulting in a black and white positive. This was then projected through the Kinemacolor projector at double speed (32 frames per second), which itself had a rotating red-green filter wheel. The results were remarkably good, the chief defect of the system being the colour 'fringing' (fringes of red or green) apparent when objects were filmed in movement. Colour was not unknown to cinema audiences of the time, as painstaking hand-coloured or stencil-coloured films had been a feature of programmes for years, but although the effects were often beautiful, they were patently artificial. Kinemacolor seemed to offer to its awestruck audiences a realism and a truth to nature that was the longed-for realisation of cinema's potential. Urban knew this more than anyone, and controlled the situation supremely. 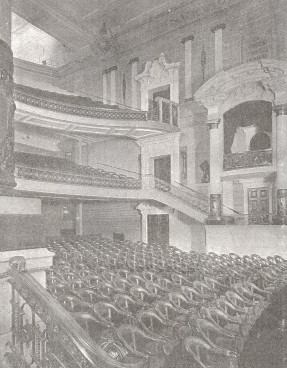 The Natural Color Kinematograph Company
Urban had decided to devote all his energies to Kinemacolor. He resigned from the directorship of his various film companies, and formed a new company in 1909, the Natural Color Kinematograph Company, to exploit Kinemacolor. This was based at Urban's new offices, Kinemacolor House, in Wardour Street, to which he moved in June 1910. Urban chose to keep the process exclusively for himself, and because the films could only be shown on a special motor-driven Kinemacolor projector, capable of the double speed necessary, his whole market strategy was based on exclusivity, high prices and a quality product. Kinemacolor became associated with news and actuality film, particularly scenes of pageantry, and Urban was fortunate that the next few years yielded much such events. The funeral of Edward VII (1910), the unveiling of the Queen Victoria Memorial (1911), the Coronation of George V (1911), and the Investiture of the Prince of Wales (1911) were all subjects made for Kinemacolor. They were given exclusive presentation at the Scala Theatre in London, a theatre really too small for Urban's ambitions, but the only on which he could secure a long enough lease, and in a short time he made it the talking point of London, and the film show that anyone who was anyone simply had to go and see.

The Delhi Durbar
Urban's greatest triumph was the Kinemacolor film of the Delhi Durbar. This spectacular ceremony, held in Delhi in December 1911 to celebrate the coronation, was filmed by several film companies, and their black-and-white records had already been seen in Britain by the time Urban returned from India with his team of eight and many thousands of feet of colour film of the ceremonies. The film opened at the Scala on 2 February 1912, and many felt that the filmgoing public would now be tired of the Durbar. Urban proved them very wrong. Offering the public an unprecedented two and and a half hours of film (16,000 feet), three years before The Birth of a Nation, Urban presented the film with a stage setting that represented the Taj Mahal, and accompanied it with a 48 piece orchestra, a chorus of 24, a fife and drum corps of 20, and three bagpipes. Its success was phenomenal. Patriotic London flocked to see it, and the proceeds from the Scala run and five road shows made Urban a wealthy man. Below are the red and green records from the original film, followed by the composite record as it would have appeared on the screen.

Kinemacolor fiction
Many Kinemacolor fiction films were made, but Urban had little aptitude for or interest in drama, and the results were generally sluggishly if not shoddily made. Among them was The World, the Flesh and the Devil, which had the single distinction of being the world's first colour feature film. Kinemacolor programmes were also shown abroad, and licenses sold to companies for the exclusive presentation of Kinemacolor in their territories. None succeeded, for in most cases the licensees hoped for easy profits, but lacked Urban's essential promotional genius. Kinemacolor had a triumphant debut in America at Madison Square Gardens, New York, on 11 December 1909, after which the American rights were sold and the Kinemacolor Company of America was formed. The company was never a success, and became most notable for its Hollywood studio being taken over by D.W. Griffith, who also took over Kinemacolor's failed plans to film Thomas Dixon's The Clansman, which eventually became The Birth of a Nation.

Failure in France
Kinemacolor companies were formed worldwide, few of them prospering (that in Japan was a notable success), and the French venture played a significant part in the downturn in Urban's fortunes. Hoping to emulate the success of the Scala shows, Urban took out a lease on the Théâtre Edouard VII, Boulevard des Capucines, Paris, which opened in December 1913. The theatre proved to be too small, poorly located, and the tickets priced too high. The Scala venture had overcome a comparatively poor location and small theatre, but in France Urban lost a considerable amount of money, and the theatre closed in May 1914.

Kinemacolor vs Biocolour
In the same month (December 1913) as the Théâtre Edouard VII opened, a court case began which eventually spelt the end of Kinemacolor. William Friese-Greene, one of the pioneers of motion pictures, was now hoping to developing an additive colour film system, Biocolour, which employed alternately stained frames of red and green. His company was called Bioschemes and was backed by motor racing driver S.F. Edge. Friese-Greene had been frustrated in his attempts to exhibit his Biocolour films because every attempt at colour film seemed to infringe the Urban-Smith patents. This was precisely what Urban wanted - a total monopoly over colour film. Friese-Greene's case was based on the grounds that Smith's patent was insufficiently detailed, but the judge dismissed the petition. However, this was reversed on appeal in March 1914, a decision upheld when taken to the House of Lords in March 1915. The appeal judge pointed out very simply that the patent claimed to produce natural colours, but with only red and green filters, it did not produce a true blue. Hence it was not a record of natural colours. Hence it was invalid.

The Verdict on Kinemacolor
From henceforth, therefore, the Kinemacolor process was available to for anyone to use. This was a dreadful blow to Urban, and in April 1914 he put the Natural Color Kinematograph Company into voluntary liquidation to protect the shareholders. It traded thereafter as Color Films, but in truth the public interest in Kinemacolor had begun to fade. Kinemacolor was the marvel of its brief age, but it had several serious defects. In common with all additive systems Kinemacolor absorbed a large amount of light in projection, and normally had to be shown on smaller screens that usual to maintain an acceptable level of illumination. Furthermore, the double speed at which the films were taken and the the effect of the intervening colour filters meant that Kinemacolor filming was really only effective in bright sunlight. This greatly affected its potential for studio work. Other significant limitations were colour fringing, occasional audience eyestrain, the expense to the filmmaker of shooting double the amount of film, and to the exhibitor of hiring the special projector necessary. Finally, Kinemacolor was not the completely natural colour system that Urban claimed it to be, for being a two-colour system it could not possibly reproduce the entire spectrum.

Despite these several disadvantages, Kinemacolor was the first natural colour film system to be shown before the public, and it deservedly drew great acclaim. Audiences had only known patently artificial hand-painted or stencil colour, and now here was something that seemed far closer to real life than anything the cinema had been able to offer previously. Kinemacolor was a remarkably good system, given its technical limitations, covering a reasonably wide range of colours, and it was particularly effective at reproducing skin tones - the essential benchmark for any colour film system. Mostly it succeeded because of Urban's brilliant promotional methods, which made audiences feel it was essential that they see the world in Kinemacolor. He himself never really understood why it finally failed.