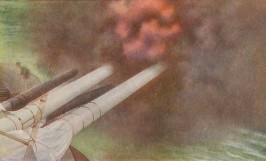 Urban as War Propagandist
The First World War was a potentially awkward time personally for Urban, who was after all the son of German immigrants. His loyalties were totally with Britain, but he was a man who made enemies and it is surprising that little if anything seems to have been made of his German antecedents, even when some of those enemies were trying to discredit him. But the fact is that he was not impeded in anyway in his attempts to interest British propaganda outfits in using film. It was an uphill struggle to interest British officialdom in the persuasive power of film, and cameras were originally banned from the war front. A united response was required, and a British Topical Committee for War Films was formed in 1915 to lobby on behalf of the film industry, with Urban as its chairman.

Britain Prepared
Towards the end of 1915 an agreement was reached with the War Office, and the first two Official cameramen were sent out to the Western Front in November. Meanwhile, Urban had also approached on his own behalf the covert propaganda outfit based at Wellington House under Charles Masterman. The results of this were the production of a documentary feature in December 1915 entitled Britain Prepared. With some Kinemacolor sequences (which do not survive), and filmed by four cameramen including Urban himself, the film showed scenes of Britain's military preparedness, and in Kevin Brownlow's words it is "unusual, if not unique, in the history of propaganda films. It is absolutely honest. It sets out to show a nation preparing for war ... and it does so with an artless pride that is quite disarming. Nowhere is there an attempt to falsify a situation, or to suggest that the British are somehow superior to any other form of life." (from The War, the West and the Wilderness). British officialdom was greatly impressed with the film, and Urban, as an American with an assumed understanding of that country's people, was sent with the film to try and get British propaganda films onto American screens.

Patriotic Film Corporation
Urban encountered considerable resistance from American exhibitors to the British propaganda films, for reasons as much commercial as political. He eventually turned for help to one William Robinson, who formed the Patriotic Film Corporation to ensure distribution of the British war films, and in particular the film which was now retitled How Britain Prepared. A publicity leaflet for the film, with endorsements from various United States government officials (including Theodore Roosevelt) called it "the Motion Picture Object Lesson for America". America, and especially American cinema exhibitors, largely resisted the lesson and the film, despite Urban's great efforts, and the Patriotic Film Corporation suffered heavy losses. Cinema owners wanted to see far more dramatic scenes, the more violent the better, and isolationist and (ironically, given Urban's antecedents) German-American interests lobbied against the film's exhibition.

Hearst controversy
Urban struggled on with his attempts to screen the British war films, but he blundered badly in September 1916, when he made an approach to the Hearst organisation regarding a possible distribution deal. William Randolph Hearst was widely seen as being pro-German, and the clear threat was that he could suppress the films once they were under his control. The British press got hold of the story, and the Wellington House propagandists were extremely embarrassed by the whole affair, especially when Urban loudly protested his innocence and threatened to sue. In short, he was making a considerable mess of handling the British war films in the United States, creating much heat and very little light. Simply, he was for the first time out of his depth. He was rescued at the end of 1916 by secure financing from William K. Vanderbilt for a new venture called Official Government Pictures, run by George McLeod Baynes. Official Government Pictures found it easy to distribute the British war films following America's entry into the war in April 1917.

The Battle of the Somme
A far more distinguished episode in his war film years was to be when Urban returned to Britain in the summer of 1916, during the middle of the How Britain Prepared saga, and edited the documentary feature film that as to become The Battle of the Somme, whose images of that battle are (in Britain at least) the most familiar film scenes there are of the war. Urban was not a brilliant editor, merely an amazingly fast one - he was known in the trade as 'The Butcher' for his rapid cutting methods, performed while ash from one of his trademark cigars dropped alarmingly onto the inflammable nitrate film below - but it was Urban's vision to take the films shot by the official cameraman Geoffrey Malins and J.B. MacDowell and to see that this material, which would otherwise have been turned into shorts, worked best as a full feature. The film astonished audiences and moved them as no other Urban film could ever have done. It is maybe his greatest achievement, certainly the greatest film with which he was involved.

Official Government Pictures
He returned to the USA and, following the formation of Official Government Pictures in January 1917, worked with them on the now successful distribution of British war films in America throughout 1917-18. Urban served as assistant treasurer to Official Government Pictures for a while, but his time working for British propaganda outfits was now over, and he turned to reviving his own business in America. In April 1917 he established a small studio and laboratories at Bayonne, NJ, and formed the Urban Spiragraph Corporation. In November he formed the Kineto Company of America, and did editing and printing work for the American propaganda organisation, the Committee on Public Information, in particular producing for them the propganda newsreel Official War Review. When the war ended, Urban, whose businesses in London were virtually dormant, decided to maintain operations in the United States.