Broke to the world 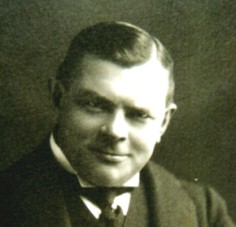 Urban's Last Years
Urban and his wife Ada returned to Britain around 1930, and lived at 34 Half Moon Street, London. He had not tired of seeking out new business schemes, and though he had retired from the movie business, he lost much of his wife's money over a misbegotten scheme to manufacture metal bottle tops. 1937 was a decisive year from him. His wife Ada died, after 27 years of happy marriage. Later that same year Urban donated all of his papers to the Science Museum in London, if daunting in the sheer scale of the collection. He seems to have hoarded every clipping, telegram or letter with which he was associated, especially for the Kinemacolor phase of his life, which was his proudest achievement. He then moved to Brighton. He had always had a close affinity with the town, the base of his associates Alfred Darling and G.A. Smith, visiting it often in the early 1900s. He had had an acrimonious split with Smith over Kinemacolor in 1910, but at this time there must have been some sort of reconciliation between the two old men, because Smith became a witness to Urban's will, and was the source of information on him used in such obituaries as there were when Charles Urban died, aged 75, in 1942.

Reputation
At the time of his death Urban was largely a forgotten man, but in more recent years a growth of interest in the history of colour motion photography, and particularly the remarkable rise in early cinema studies since the 1970s, has seen the name of Urban regain, in these small worlds at least, the ubiquity and magic that it had before. Although the lasting motion picture library of which he dreamed in the 1920s never came to pass, and many hundreds of the films that he produced are now lost, a sufficient number survive (see Sources) to ensure that his work endures. Urban almost never produced a bad film. His productions all have a hallmark of quality, in their subject matter, camera work, editing and presentation.

The Legacy
Notable among his surviving films are the First World War documentary features, Britain Prepared (1915) and the magnificent The Battle of the Somme (1916), which Urban edited; the Anglo-Boer War films of Joseph Rosenthal, as well as numerous other turn-of-the-century Warwick Trading Company productions; S.S. Olympic (1910), a breathtaking documentary filmed over two years showing the construction of the sister ship to the Titanic; the exhilarating Torpedo Attack on H.M.S. Dreadnought (1907); many of the Kineto travel films, including beautiful scenic views of Britain in a series made in the early 1900s for railway companies; some of the scientific films of F. Martin Duncan and Percy Smith, of which Urban was so proud; a notable record of the 1921 Washington peace conference, Permanent Peace, the nearest Urban came to making a political statement; Frank Ormiston-Smith's pioneering mountaineering film, The Ascent of Mont Blanc (1902); and numerous productions in the Movie Chats series, and fiction films made by the French Eclipse company.

Tragically for Urban, few Kinemacolor films now survive - around 50 titles from an estimated 1,000 films originally produced by the different Kinemacolor companies across the world. A collection of travelogues discovered in 1992 and now being restored by the Cineteca Bologna has bolstered the number, but of the great productions such as the Delhi Durbar films only fragments remain. Their full discovery remains a film archivist's dream - their allure remains Urban's lasting monument.