We put the world before you 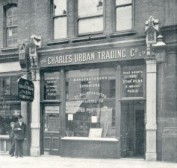 The Charles Urban Trading Company
Urban set up the Charles Urban Trading Company at 48 Rupert Street in 1903, with his former employers Warwick seeking to bankrupt him on account of earlier loans, and to deny him use of the term 'Bioscope' as a trademark. But he was victorious in both cases, and the fact that several Warwick staff left to join his new venture spoke volumes.

Science and Education
As an independent businessman, Urban flourished, and increasingly sought to market his own name and that of his products as hallmarks of quality. The bedrock of his product continued to be the travel and topical film, with Joe Rosenthal and George Rogers reporting from the Russo-Japanese of 1904/5 from the Japanese and Russian sides respectively. Other travel cameramen working for Urban were H.M. Lomas and John Mackenzie. But he now began to take an increased interest in promoting scientific film, starting his campaign for the cinema to be recognised as an educative force. Urban's understanding of what education might mean does not appear to subject to much analysis, but it was undoubtedly sincere, and even courageous, though at a time when the film industry was frowned upon for its lowly status and largely confined to an impoverished working class audience, anything that stressed the higher values of the medium was probably good business. Other filmmakers tried to attract a moneyed middle class audience by giving film versions of the classics; Urban gave them the world through a microscope.

The Unseen World
Typical of Urban's approach was the series of films he initiated at the Alhambra music hall in 1903, entitled The Unseen World. These films were produced by the first scientific filmmaker to come under Urban's wing, F. Martin-Duncan. A sequence photographer and lecturer who had adopted the cinema to his special interest in microphotography, Martin-Duncan's work came to the attention of Urban, who naturally responded to this promise of science as entertainment. Martin-Duncan's films were marketed by Urban as filmed by the 'Urban-Duncan Micro-Bioscope', a perfect example of how Urban absorbed and shared in the brilliance of others. Audiences were certainly fascinated by the microscopic scenes presented on the screen, for example the revelatory Cheese Mites of 1903.

Putting the World Before You 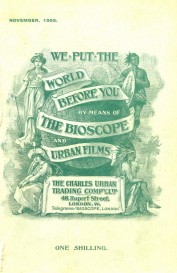 Having formed the Charles Urban Trading Company in 1903, Urban progressively diversified his film business interests. He formed the Eclipse company in France in 1906, and established the Kineto Company in 1907 to produce his scientific and travel films. Once he had the colour film system Kinemacolor, he created the Natural Color Kinematograph Company to exploit it. Urban cameramen continued to tour the globe and to put the truth behind the slogan, 'We Put the World Before You', which Urban used to advertise his Urbanora shows of scientific and educational films. He was a keen advocate of sponsored filmmaking, doing deals with railway companies that would grant him all facilities and generous access in return for the free advertising to holiday destinations that Urban's travel films offered. When he agreed just such a deal with the Canadian Pacific Railways, a company which was well aware of the attractions and the internationality of film, it was with the ultimate aim of advertising Canada as an attractive place for emigrants. Joe Rosenthal was the cameraman sent out to Canada.

Fiction vs Reality
Urban produced few fiction films throughout his career - those he did produce were too often stilted, gauche and poorly made even by the low standards of much British film production of the time. Most of what he offered as Urban fiction films were in any case productions of his French company Eclipse. An exception to this general rule were some ingenious early science fiction films based on then current fears of invasion made by trick film specialist Walter R. Booth, including The Airship Destroyer and The Aerial Submarine. But Urban loved reality, loved packaging it and making it palatable to a general public that on the back of the Education Act of 1870 and 1902 was newly literate, absorbed popular magazines, and was keen to see if not to learn as such. Urban understood this audience, and instructed his cameramen to go always for those scenes that immediately captured the eye, to record first impressions. He set out his manifesto for the motion picture as an educative and propagandist force in his only publication, a 1907 pamphlet entitled The Cinematograph in Science, Education, and Matters of State, which was offered free to all users of the Charles Urban Trading Company's services.

Nationalism vs Internationalism
Urban was an internationalist, and although he became deeply fond of his adopted country, and became a naturalised British subject in 1907, he retained a global outlook and freedom from nationalist partiality, the lack of which was beginning to hamper some of his rivals in the British film industry, as they felt the threat of American competition and responded with chauvinism. Urban's American nationality had been a mixed blessing - he carried with him the glamour of the United States and that air of a natural way with moving pictures that somehow eluded the British; but he also had to deal with repeated anti-Americanism and being treated as an outsider. His change of nationality was probably as much a sound commercial move as an expression of undying loyalty to his new homeland.

By far and away the most celebrated of all the scientists who came under Urban's wing was Percy Smith, a shy and retiring functionary at the Board of Education, who happened to have a passion for animal life and photography. Urban got to know of his photographic work in 1907 and persuaded him to make films along the same lines for Urban to exploit commercially. Smith was a patient and dedicated scientist, who pioneered many of the classic techniques of nature photography using stop motion techniques, but he was not above a bit of showmanship, and saw in Urban someone with enthusiasm but also the necessary patience to let him work under the best conditions. Eventually in 1910 he perfected his mechanism for stop motion cinematography, joined Urban full-time, and made his famous The Birth of a Flower, which Urban released in Kinemacolor. The film made headlines, as did the earlier The Balancing Bluebottle of 1908 (above), from which photographs were published in the press as they seemed to illustrate the impossible.

First in Wardour Street
On 1 May 1908 Urban moved to a new premises in Wardour Street, becoming the first film business to be established in what soon became (and has remained) the heart of the British film industry. He named the building 'Urbanora House', and at its opening unveiled to an invited audience the marvel that was to become his greatest achievement, Kinemacolor.